In February 2016, Sky News ran an article about injuries in the English Premier League, stating:

‘Watford were among the favourites for relegation before the season started but are currently in the top half, no doubt helped by having the best injury record in the league. Watford’s squad have suffered just 10 injuries this season.’

Watford began using BPMpathway at the beginning of the 2015 season and it has been used as a regular screening tool for all their players, as their Head of Sports Rehabilitation, Mike Spanou, explains:

‘During the preseason period all of our players were screened in a series of movements across a variety of joints. Following this period of initial screening, we devised a system of screening any player who played over 60 minutes, 72 hours after each game. 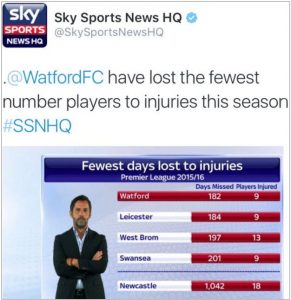 The initial screening period allowed us to collect objective data on active joint range of motion. With this data we were able to put together individual mobility sessions if any bilateral differences were identified. This first screening also gave us a baseline of normal joint ranges across the players.

The post-game screening protocol gave us a lot of useful information and allowed us to objectively identify potential injury risks if a drop in baseline joint range had decreased. After collecting data for the first few games we calculated the rolling trend of each individual players joint ranges, and from this we devised a traffic light system of injury risk (within 10% of trend was green. Between 10-20% was amber. A decrease in more than 20% was red).

Performing this screening has allowed us to have a proactive insight into each player following performance and identify any injury risks in a quick and easy way. Also, with investigating the collective data of the squad we have been able to identify patterns of decreased mobility. Identifying these patterns has given us the opportunity to correct them before they developed into injuries. In summary, this software has provided us with a platform to identify risk players and has given us the ability to spot trends across the team as a whole.’

For more information, go to: http://www.skysports.com/football/news/11095/10155134/premier-league-injury-table-man-city-have-suffered-the-most-watford-the-fewest