In October this year, Calderdale and Huddersfield NHS Foundation Trust, one of the first hospitals in England to trial BPMpathway, were named Overall Winners at the 2019 HTN Awards for ‘Digital Day Case Knee Pathway’ which also won the Most Promising Pilot award.

Digitising rehabilitation within the orthopaedic pathway has been invaluable to Calderdale and Huddersfield NHS Foundation Trust. Graham Walsh, Consultant Orthopaedic surgeon and Chief Clinical Information Officer at the trust has worked closely with BPMpathway over the past 12 months:

‘Patient wearable technology was something that was of great interest to us, we saw it as an enabler to get patients home on the same day, and also to improve patient satisfaction. What we discovered was that although digital technology is often seen as something that distances the patient from healthcare [as they are able to return home], we found that actually the wearables brought the patient in and they felt increasingly part of their journey.

They were able to communicate with the physios which we found invaluable, the patients were able to monitor how their progress was doing once they were discharged, which is something quite novel and something that we hadn’t seen before. All those things meant that the patient felt closer to the treatment.’

As the developers of BPMpathway, 270 Vision is delighted that it has met with such resounding success among surgeons, staff and patients alike. 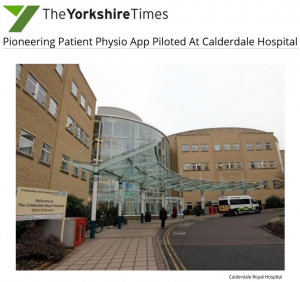 ‘Education and communication between everyone is the key to our success. Patients feel they have more ownership of their health and care, for the pathway to be thrive they need to be as committed as the hospital team. This is the way to go. It is better for them and we’re reducing our lengths of stay too, without compromising patient care or outcomes.’

‘The new [BPMpathway] app will not only speed up the patients’ recovery time and reduce waiting lists, but it will also save money. The app enables patients to reduce their stay in hospital for several days and they don’t require multiple physio appointments.’

Jacqui Potter, one of the first patients to test the device following knee surgery at Calderdale Hospital, said:

‘The [BPMpro] sensor kept me motivated each day to do my exercises, it’s easy to download via the App Store on my iPhone, and having the sensor made me do my exercises daily because I knew the physios were watching me. It was very easy to attach and use unattended.’

Following on from their triumph at the HTN Awards, Calderdale and Huddersfield FT were also named Highly-Commended Runners Up in the Digitising Patient Services Initiative category at the 2019 HSJ Awards with Digital Day Case Knee Pathway. The HSJ Awards have been celebrating healthcare excellence for 39 years through huge political, technological and financial challenges within the sector.

As David Oates, Group Managing Director of the B. Braun companies in the UK, said:

‘It’s an incredibly exciting new product which benefits both clinicians and patients in equal measure.’